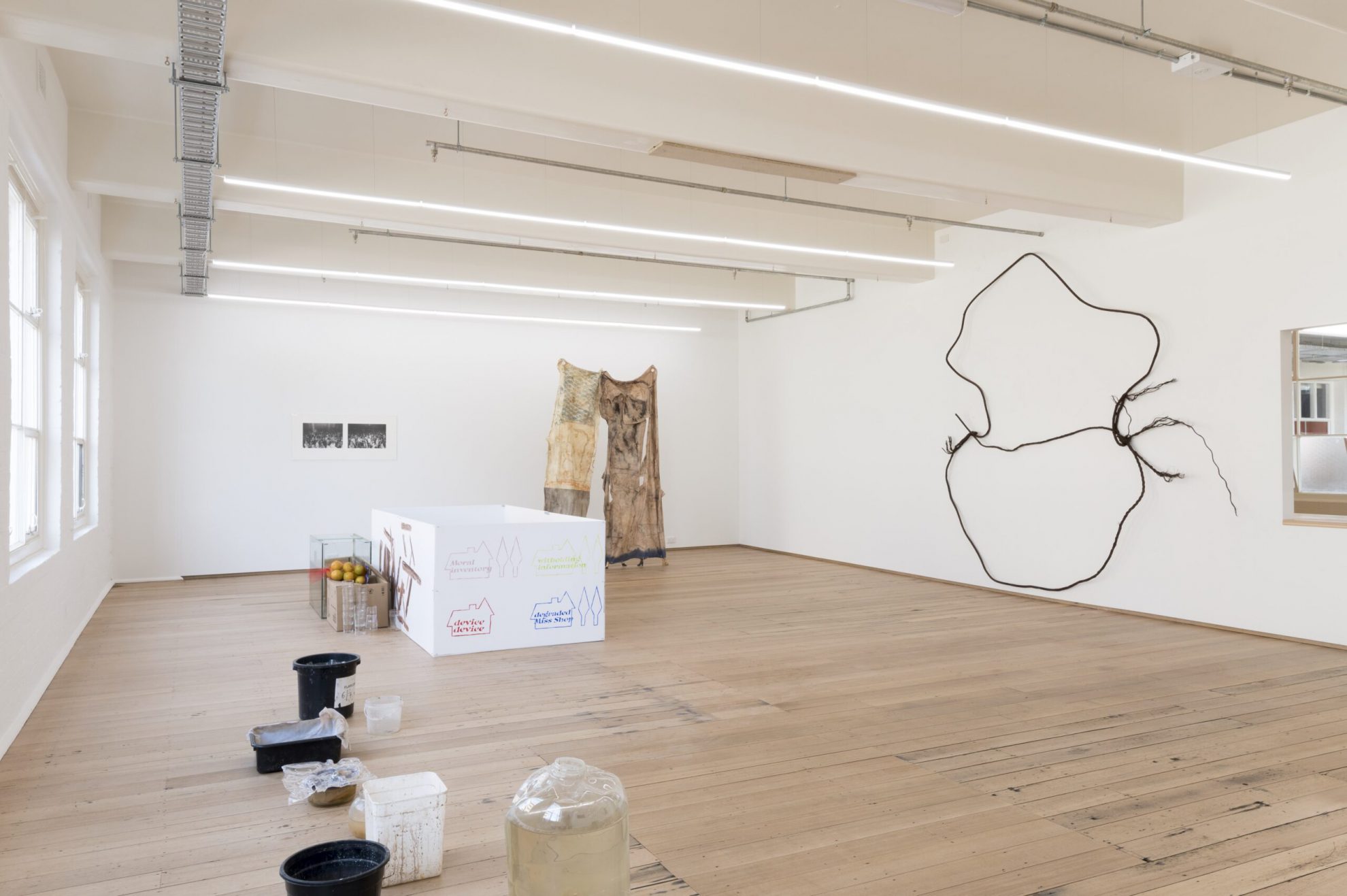 In planning this exhibition we began with a question: what reproduces the conditions for an artist’s work? We might think of this broadly: a community, a “scene”, cultural relationships and identities, state policies, economic and social determinations (the wage and the unwaged labour in its shadow, class privilege and lack thereof), the past and present of colonial effects (as well as the refusal of and resistance against them), an environment (in the micro and the macro sense of the word), and habits of seeing, perceiving, and producing. Or we might think of it more intimately: food, money, rest, friends, work… These lists are far from being exhaustive or without gaps.

We began with this seemingly innocuous question, which, it turns out, can’t simply be answered by works of art. What we can say is that it’s not the role of this exhibition to provide answers, rather, what we can observe is that artworks themselves raise another and very old question: what is the ability of the work of art to reflect the conditions in which it is made? Or said another way: what does it reproduce?

MeowTV documents the openings and parties at Meow, a gallery formerly run from a share-house living room in Carlton by artist-occupants Hana Earles and Brennan Olver, and artist Calum Lockey—recently reopened at a house in West Melbourne (@me_ow2). Filmed and produced by Carmen-Sibha Keiso, the series parodies the format of reality TV and the pedestrian “about town” reporting of community television shows. Shot with a dated hand-held video camera, it ironically inhabits the documentary format while quoting the performative enthusiasm of home video.

For an audience, we can observe that MeowTV produces a distance between who is represented in the series—the artists and audience become actor-participants—and who remains outside of it. The series sits in an uneven space between documentation and the way in which documents function within the self-mythologising system of art. It records a small scene at a certain time, while parodying the possibility of a truthful document.

A large section of Lorraine Connelly-Northey’s work focuses on reproducing the form of the Narrbong. These woven fibre bags are traditional to the Waradgerie (Wiradjuri) people for the gathering, collecting, and storing of food and other objects of value. As a tool, they are intrinsically linked to the reproduction of a culture through the simple and universal need to provide, gather, carry, hold. She reproduces this form with a range of gathered materials found on the side of the road, in illegal rubbish dumps, or decaying on farms. Connelly-Northey asserts that her practice is undergirded by her culture’s principle that “you only take what you need”. Because of this, she only focuses on collecting materials and producing artworks when an exhibition dictates it. Furthermore, if a work goes unsold or is returned to Connelly-Northey, it may be digested as material for another work. As Connelly-Northey explains:

“The scouting begins when I get a commission for an exhibition. We Aboriginal people only take what we need when we need it. I do a lot of travelling to spot something and it can take up a lot of time. On one occasion, it took me two years to find the owners of a farm to take two rolls of wire. It is not easy, but well, it is about earning what you get. Before I had a driving licence I had to rely on other people. It is still hard to know how much I need, so I tend to get a bit too much. But the beauty of that is that I always work from leftovers and if I don’t use a material, I take it back. Also, in the sculpting process, I try to not alter the material too much.” [01]

The work on exhibition here is composed of two bag forms from Connelly-Northey’s Narrbong-Galang (many, many bags) exhibition at Roslyn Oxley Gallery last year.

Spencer Lai’s work produces associative meaning out of a range of accumulated materials that are worked into assemblages, installations, clothing, and exhibitions. These materials often include found objects or images from pop culture—lifted from thrift stores, online, or the mall. We should consider the usage of “material” widely in looking at Lai’s work, and include their social relations (with other artists, spaces, and so on) as part of what they pull into what they produce, and how they produce it.

Lai’s use of various commodities points to how identities are constructed within a consumerist culture, giving away to the observation that subcultural identities can be assembled on Instagram or at the mall. The works are rarely singular or stand-alone objects. Rather, their identities are intentionally constructed from multiple references, works, as well as contributions from other artists. Beyond being autonomous, they are predicated on the wider dialogues that constitute the material for Lai’s work.

Isadora Vaughan’s work proceeds from a consideration of materials, their limits, and their ethics. Recently, she has been looking to sustainable materials that are able to be broken down or composted after their “shelf-life” as art works is over. For example, she has looked into the industrial uses of fungi in building materials. These interests extend into Vaughan’s own research and material processes, investing in permaculture models of farming for the production of her art materials. In doing so, part of her intention is to recuperate her own overproduction into a self-sustaining system.

With Resus, Vaughan exhibits vessels produced from various materials—glass, repurposed buckets, moulded plastic—representing organs and processes of the body. These contain SCOBY, the symbiotic culture of bacteria and yeast that forms as a thick membrane in fermentation processes that, if divided, will reproduce under the right conditions. Typical of the processes from growth to digestion to decomposition that Vaughan engages in, this work also exhibits a stage in the production of Vaughan’s materials. These sculptures require caring for and feeding, and will naturally reproduce under the right conditions.

Josey Kidd-Crowe’s paintings are largely representational, yet they are far from traditional realism or a social document. Rather, these works rely on the evocative. Worked into old bedsheets and tapestries of discarded fabrics, his paintings are often populated by people and places that seem recognisable, yet they are difficult to place at any one point in time. Much of these images come from the imaginary materials of literature and old magazines, but in their conversion to painted images they take on a less referential quality. Embedded in supports that escape the illusion of the canvas, these works expose the process of painting without falling into reductionism. Kidd-Crowe’s claim to representation isn’t about accurate depictions or records, but rather about the effects of real life on our imaginations—be they individual or social—and the distance between these images and the real material that they’re produced from.

Since the 1970s, William Yang has photographed the social scenes in Sydney in which he has circulated. Developing a diaristic take on documentary photography, his photographs have become iconic memorialisations of the Sydney gay scene before the gentrification of Oxford Street, the closure of Kings Cross, and the corporatisation of the Gay and Lesbian Mardi Gras. More personally, they speak to Yang’s investigations into the construction of Queer and Asian Australian identity at times in which neither were given any particular nuance in representation.

Reproductions is curated by Nicholas Tammens, 1856.

Nicholas Tammens is curator of 1856, a program of exhibitions and events at the Victorian Trades Hall Council, a trade union building in Melbourne, Australia. Recently he was appointed to a curatorial position at Kunstverein Hamburg, Germany. Previously he was Associate Curator for Yale Union, Portland, where he curated an exhibition on the work of Flemish conceptual artist Jef Geys. Elsewhere, he has presented lectures at WIELS (Brussels) and Kunsthalle Zurich, and wrote for Mousse Magazine (Milan), May Revue (Paris), and Memo Review (Melbourne).

1856 is a program of exhibitions and events staged at the Victorian Trades Hall, it focuses on the cultural production of the labour movement, the rights of artists, and the many ways in which artists address social issues in their work. 1856.com.au