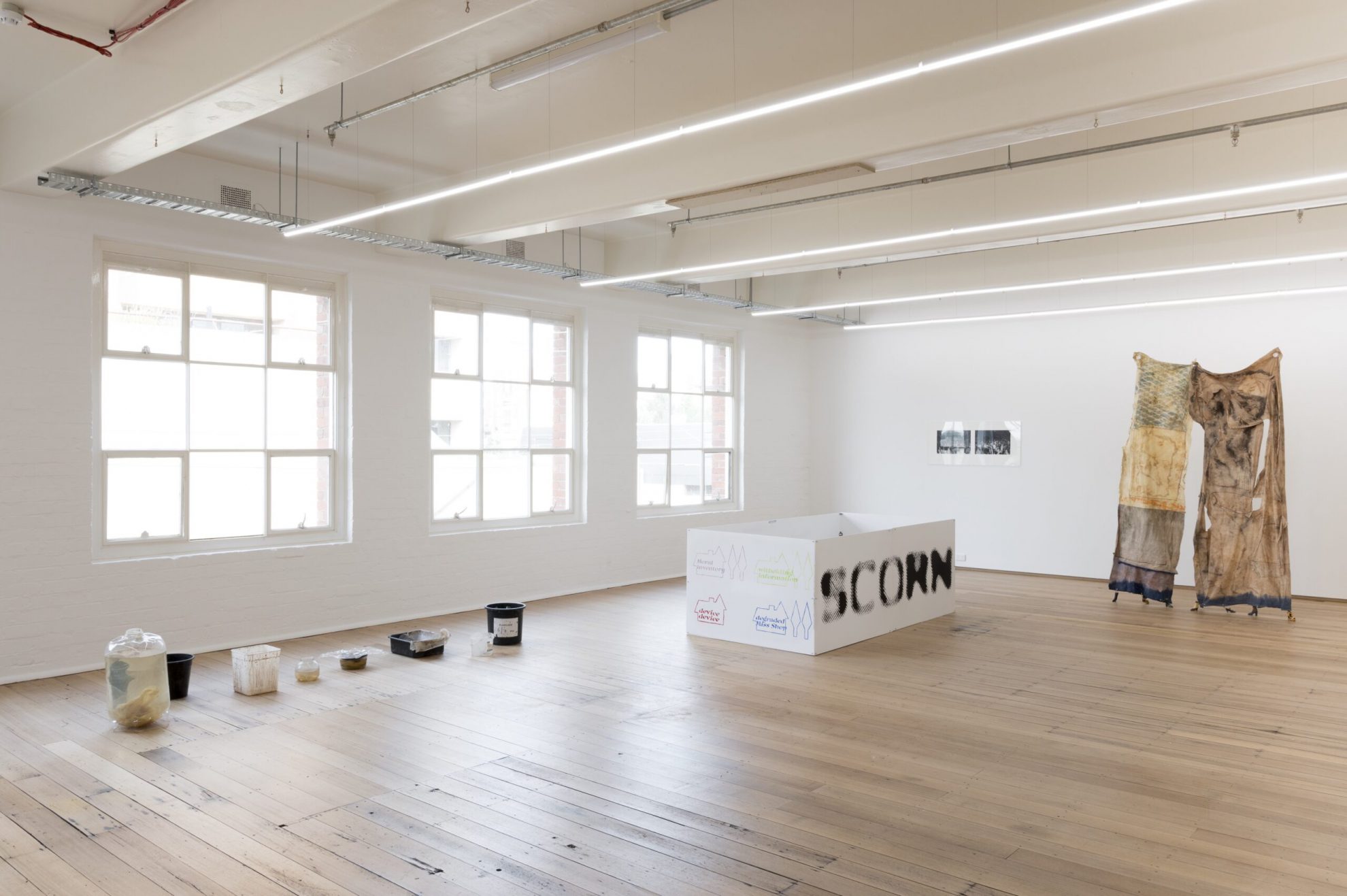 Improvements, West Space’s inaugural exhibition at Collingwood Yards, ruminates on the aspirations and costs of improvement. Shown in parallel to 1856’s exhibition, Reproductions, the two exhibitions collectively and separately investigate the conditions under which art is produced.

West Space has been sited in multiple locations in the past 27 years. Beginning above a food court in Footscray, in the Western suburbs of Melbourne (the “west” of its name) it has progressively moved east—via two CBD locations and a temporary transit through Fitzroy—to its current location in Collingwood within a multi-building arts precinct. Since their original construction more than 140-years ago, these buildings have been home to a Technical School, a courthouse, and council chambers, before entering into a sustained period of vacancy before becoming an arts precinct. In recent years, Collingwood has undergone immense changes in its social and economic fabric. In 2015 the implementation of the Local Law No 8 outlawed public drinking on Smith Street: Collingwood’s major thoroughfare and an important meeting point for the Aboriginal community. The law was backed by local business owners and real estate speculators, but disputed by the Victorian Aboriginal Legal Services as “mirroring a return to old fashioned punitive approaches to law and order marked by the over-policing of the poor and marginalised”[01].

Land rights, pay structures, reproductive justice, health equality, police abolition — urgent social reform is a clear beginning point in thinking about collective improvement. Yet improvement maintains a subjective character. Historically, the term improvement is linked with colonising forces of the British empire in relation to land improvement, begging the question: improvement for whom? And at what cost? When considered at the individual level, a desire for betterment can be manipulated into individualised causes with little regard for social, material, economical and environmental consequences. It slips into neoliberal agendas, from the weaponisation of self-care, to the violence of gentrification and widespread ecological degradation. The exhibition Improvements brings together existing works by Mark Smith and Ilana Harris-Babou with new commissions by Rafaella McDonald, Georgia Robenstone and Katie West. The artists bring different subjectivities to the concept of improvement, and to West Space’s position within Collingwood.

Improvements adapted its title from Mark Smith’s eleven hand-formed ceramic letters that spell out the word IMPROVABLE. For the past 15 years, Smith—who lives with a disability— has made art invested in the shared, yet singular, human condition of having a body. He is perhaps best known for his figurative soft sculptures, such as his life-sized reproduction of a newborn baby being born; or his small scale ceramics studies of women’s bodies. IMPROVABLE is an open-ended reflection on the conditions of its own production—not idealised by the artist, the work is slightly wonky, each letter balances precariously to stand. Although a departure from his figurative representations of the body, this work extends Smith’s ongoing interest in the variances and differences of being human.

Casting herself or her mother in roles that include the host of a cooking show, a lifestyle influencer, and a reality TV Star, Ilana Harris-Babou’s multimedia practice interrogates the aspirational spaces of late capitalism and the intersections of race, class and labour therein. For Improvements, Harris-Babou presents a satirical single-channel video, Reparation Hardware. Riffing off the language of home improvement vloggers and the marketing videos of Restoration Hardware—an up-scale American furnishing company—Harris-Babou speaks of “unresolved pasts and untapped present”, offering a proposal for how reparations might be delivered to African-Americans. Through humor, the artist draws attention to the cliched tropes of nostalgia and authenticity in the language of advertising, and the effect this has in glossing over America’s history of slavery. Reparation Hardware serves as a commentary on the institution of slavery in the United States, from its historical past to its continuing effects in present day North America, and the ongoing fight for financial compensation for the descendants of slaves.

Interested in unstable states, Rafaella McDonald explores notions of precarity through material. The installation How____ relates to a pair of pants I’m not sure consists of two pieces of suspended hand-dyed fabric, anchored by a line of tiny shoes, to create an anthropomorphised pair of pants. This fabric has been reworked through various processes of staining, patterning and mark marking including imprints from found objects, mixtures of synthetic and natural dyes from gathered materials. The abstracted form of unwearable pants is a recurring symbol for the artist, other iterations have been made out of edible, domestic substances including toffee and boiled candy. Here, the pants are pinned in place by double ended candles, an allusion to envitiable combustion and the exhaustion that comes from lighting the candle at both ends.

The roles of social agency and collective action in the fight for public space are key concerns for artist Georgia Robenstone. Her two-channel video work, Power Without Glory, explores the changing social, material and political conditions that “transform” suburbs. This video reuses local found footage—from pop culture, Youtube videos, advertising—together with loosely associative imagery shot by the artist. The work takes its title from Frank Hardy’s novel of the same name, an illegally published piece of 1950’s social realism set in the suburb of “Carringbush”, a fictionalised version of Collingwood. Hardy’s novel criticised the corruption of Melbourne’s local Labor politicians through thinly veiled fictionalisations. From the brutal colonisation of unceded lands, the gridded city plans imported from Europe, the subterranean pathways of cables, to the rhetoric of real estate agencies, Power without Glory speculates on ongoing forces of gentrification that shape cities and displace communities.

Katie West is interested in systems of renewal and reciprocity. Combining textiles and social practice, the artist uses plant-knowledge to cultivate connections to place, and to create sites for meditation, reading, listening and conversation. Her process begins with gathering materials on country: leaves, bark, flowers, each fallen to the ground after storms or heavy winds. The hot or cold seasons determine which dying process is used: in cold weather, boiling water is used to transfer dyes; whereas in the hotter months, fabric and dying materials are immersed in water and placed in the sun. The infusion of place into these fabrics forms the central part of West’s installations. They are a reminder of our indivisibility from the landscape, from the microbiomes that we host in our bodies to the natural and built environments in which we live. Emphasising our points of connection, to the land and to each other, Katie creates places to address trans-generational trauma. Permanently installed in the West Space office, the work invites institutional self-reflection and accountability in regards to West Space’s position on stolen land. It is a clear reminder of the duty of care owed to the custodians of the countries in which we live and work.

In the months that followed this exhibition’s conception, the list of improvements (now known as demands) grew. Katie, Rafaella and Georgia’s commissions were made over Australia’s disastrous fire season of 2019-2020, and the global pandemic that swiftly followed suspended the opening of this exhibition for three months. While institutions furloughed staff, artists were unionising and collectivising, practicing mutual aid and enacting social economies. In the face of mass closures and lockdowns, artists and arts workers called for protection for casual workers, stable funding for organisations, those in positions of power to sacrifice their salaries, state governments to prevent major organisations from entering into administration. As these collective demands were being made, there were demands on individuals to translate self-isolation into an opportunity for self-improvement; to maintain productivity amidst a pandemic.

And now, as restrictions regarding public gatherings have begun to ease, the socialist policies of free childcare and JobKeeper are being withdrawn, global reckonings over police violence and racism are rising. Cracks in our already failing systems have become chasms, as we bear witness to the ongoing effects of the systematic devaluing of society’s most vulnerable. The works in Improvements offer multiple counter-positions to the neoliberal agenda of continual improvement and exponential growth. As we reckon with the challenges of 2020, we are collectively imagining an improved world — the only way we can do this is by dismantling the systems that are failing us.

Improvements is curated by Amelia Wallin.

Amelia Wallin is a curator, writer and the Director of West Space in Melbourne. Her recent research and writing examines reproductive labour in the spaces of contemporary art, in relation to care, feminisms, and practices of instituting. She had held positions at The Hessel Museum of Art, Performa (New York), The Biennale of Sydney, Performance Space, and Campbelltown Arts Centre (Sydney).

Amelia has curated programs at The Kitchen, The Hessel Museum of Art, Performa15 in New York, and Firstdraft, PACT Centre for Emerging Artists in Sydney. Her writing has been published in Memo, Running Dog, Runway, un Magazine, Artlink, and others. She holds an MA in Curatorial Studies from the Centre for Curatorial Studies, Bard College, and a BA in Theatre & Performance Studies and Art History & Theory from the University of New South Wales.