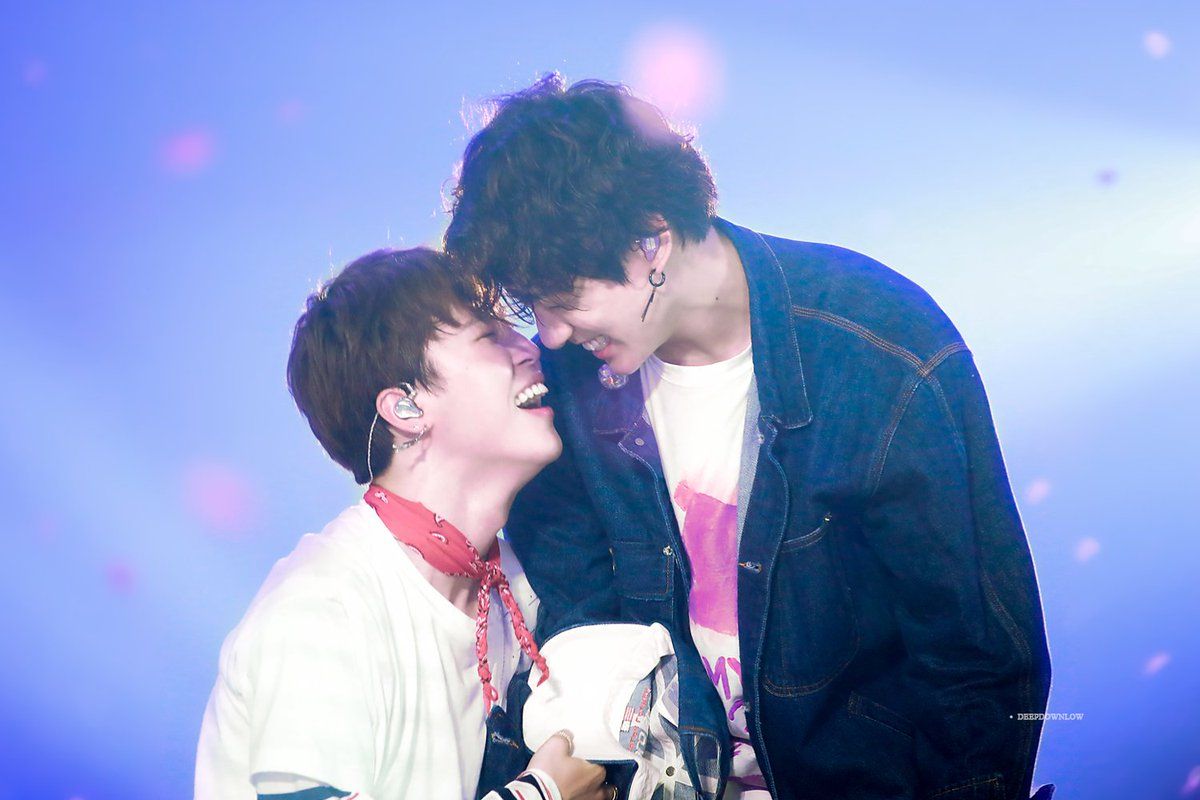 “Why does it matter whether or not they’re together in real life?”

My partner was seated next to me, our legs folded atop a long bench, knees bumping. He scooped a mouthful of what we both agreed was a horribly executed mango on shaved ice. I chomped it in frustration. He held back his laughter.

He’s compared my love for Korean pop group BTS to his love for Star Wars, but he couldn’t grasp my obsession with two members: Park Jimin (26) and Jeon Jungkook (24), and the… unspecified bond they have. Scratch that. My sister and I, along with a sizable portion of the fandom are deep-in-our-marrows convinced they’re secretly dating.

The duo’s dynamic is best encapsulated by the trope: ‘he’s large (JK) but I’m in charge (Jimin).’

For Jungkook, the youngest in the group, losing just isn’t part of his vocabulary. His unrivalled athleticism is softened by a variety of artistic pursuits including drawing, painting, photo and videography. Despite rocking a tattoo sleeve and multiple piercings, he exudes ‘baby brother’ energy—helpful, sweet, introverted.

Jimin, on the other hand, has a contemporary dance degree under his belt that makes him a versatile and emotive performer. He describes himself as ‘cutie, sexy, lovely, sweet guy’ but is really a Slytherin Head Boy with a Hufflepuff heart. On their trip to Malta as part of the travel series Bon Voyage, each member was given pocket money to buy souvenirs. Jimin spent his on snow globes to gift to everyone else in the group. He’s the person you want to wrap you in a blanket burrito when you get your heart broken because he makes the worst feel bearable.

Together, they exude a magnetic charm that makes you want to scream into your fist.

On Jimin’s birthday in 2017, the two went on vacation to Japan—the only known pairing to have travelled outside of BTS’ schedule. Jungkook released a vlog which he shot, directed, and edited titled ‘Golden Film Closet (G.F.C) in Tokyo’, documenting their adventure.

Beyond archiving the special day, it immortalised every sensory experience: the weather, food, items chosen and bought. Instead of a PSA announcing “look at my person!!!”, I understood couple vlogs as a gift to say, “this is how I see you, this is how you make me feel, this is what I think about when we’re together.”

The song choice, therefore, is paramount as the lyrics and melody serve as the vlog’s backbone. Jungkook chose the track, ‘There for You’, a collaboration between Troye Sivan and Martin Garrix, which explored resiliency in a relationship during difficult times. Troye, who is openly queer, is an artist Jungkook often refers to as one of his favourites.

The vlog moved me, perhaps more than others, because I used to make them when I dated someone I really, really liked.

“Around the world and back again,

I hope you’re waiting at the end.”

Rather than a haphazard montage, every shot is cut, timed, and styled to each lyric. The camera follows Jimin’s back as he navigates Tokyo’s lively streets and alleyways for the first line. For the second, we view him front on and slowed. The words feel apt as they were scheduled for a world tour that would end up lasting a year, months after the vlog was released.

“When you’re screaming out, and they only hear you whisper,
I’ll be loud for you.

This chorus is set in a small restaurant after the two ordered beef rice bowls. It involves cuts of food slowly disappearing from Jungkook’s bowl, interspersed with Jimin eating and chewing happily, ending with him rubbing his belly. The last shot lingers on Jimin’s empty bowl—long enough for the audience, or at least me, to pick up on its significance.

Long-time fans would remember that during their training and debut days, BTS followed an almost oppressive diet and exercise regimen. Albeit a ‘normal’ part of the K-Pop industry, Jimin experienced the worst effects including fainting during concerts. It’s not the most ‘romantic’ shot, but this scene feels as if Jungkook’s assuring us: “Don’t worry, Jimin-ssi eats well nowadays!”

The video ends with the lyrics

“I’m running, running just to keep my hands on you…”

Shots of Jimin walking out of Disneyland in a Mickey Mouse hat are sliced and styled to match the song’s rhythm. Fans noticed on multiple livestreams that year that the two’s lock screens were pictures of Mickey.

This isn’t the first time I’ve obsessed over an ‘on-screen’ couple who seem suspiciously chummy. Damon (played by Ian Somerhalder) and Elena (Nina Dobrev) from The Vampire Diaries came out as an ‘off-screen’ couple in 2012 after two years of discreet romance. Snow White (Ginnifer Goodwin) and Prince Charming (Josh Dallas) from Once Upon a Time, also announced their relationship that year, and are now parents to two sons.

At 16, I was hunched over my school’s library computer watching the pairs’ flirty banter, innocuous touches during interviews, and fan-made kiss scene compilations in 240p. Deep in sleuth mode, I gathered evidence of what real love looked like and the ways it resisted hiding.

Rather than more ‘loud’ moments like G.C.F, the ones that live in my head rent free are the mundane ones.

One is of Jungkook forming a heart with his fringe while brushing his teeth. As Jimin passes, he mumbles (because of the foam in his mouth) “heart-u.” Jimin shoots a small smile and continues past him. Jungkook says louder, “heart-u!” in an indignant tone.

It reminds me of when my partner’s busily cooking a Michelin-star-worthy dinner for us and I’m shoving my Animal Crossing avatar dressed as a maid at his face. It’s the same indulgent, soft smile. A patient, “not now, my love.”

As other members answer questions on press tours, Jimin would occasionally crack his neck, and like clockwork Jungkook would sweep in to massage it.

During long drives, I often find my hand absent-mindedly drifting to the nape of my partner’s neck. Whether it’s to release the tension on his shoulders or just to play with his hair.

And last, a fan-shot clip of Jimin hugging Jungkook’s back just as the stage lights go off. A split second captured between public and private.

When my partner and I travel, we hold hands on the first night to fall asleep like otters. There’s no performativity or even practicality. Only intimacy.

“Why does it matter whether or not they’re together in real life?”

Fifty minutes of frantic over-explaining later, our mango on shaved ice has turned into a bowl of yellow goop.

“They remind me of us,” is what I should’ve said. “It matters because I made a vlog for the first time in 6 years and it’s of you and Sydney and I was so happy when you said: ‘I want this projected on my tombstone when I die’.”

Feeling deflated, all I could say was “I don’t know.”

Natasha Hertanto is a Chinese-Indonesian storyteller and dog-mom based in Naarm. Her work can be found on Kill Your Darlings, Voiceworks, Australian Multilingual Writing Project, Archer, & more. In 2021, she completed The Wheeler Center’s Hot Desk fellowship and won the Ultimo Fiction Prize. She studies International Development at RMIT.