‘Augury – The diary of birds’ is a collection of writing and recorded conversations that describe experiences of preternatural communication with the natural world. These stories delve into those moments when contiguous worlds overlap, and the trauma of loss reconnects us to the world outside in new and unexpected ways.

My mum passed away on the 31st of January, 2020. In the year following her death, I had a whole series of strange interactions with wild birds that felt emotionally charged and made me think of her. This is a record of that time. Later on, I discovered that the word which describes this phenomenon is ‘Augury’.

“First time AR went into mums shed after she died he was tapped on the shoulder by a bat – he knew it was mum – it was her kind of humour.”

“Looking for signs of mum. Weird happenings with a tawny frogmouth waiting on the gate post for me after yoga one night. One also flew at the car when coming home with AR and the girls”.

“Noticed a butcherbird always in my view out multiple windows. Maybe it’s mum. Is she checking in encouraging me to get into the garden and take time off.”

“Aziza stuck her hand in her pooey nappy. I got annoyed and when I was changing her a butcher bird flew up to the window sill and just looked at us with intensity. I said “hi mama”, Aziza said “hi Grandma.” Was she telling me it’s time to toilet train Aziza?”

“Got bombed by a magpie while running on the driveway. Then a crow followed me from tree to tree for 2km.”

“There is a bustard (yet to be named) that has made friends with dad and is checking in on him. He has seen it everyday this week in different places around the farm. I’ve not seen it yet but know that it was watching over us while we all drove the tractor reseeding the paddocks after the fire.”

“Saw a magpie that looked really big in the paperbark paddock and thought it was a bustard. Turned out to be just a magpie at maghrib time – weird.”

“Asked dad if he thought the bustard was mum.”

“Bald magpie at the back door. Seemed very keen to chat. I fed it pepitas, sat down and said “hi mum”. AR was unloading the car but I said I couldn’t help because I was feeding mum. It kind of looked like mum with its spiky grey hair and eyebrows.”

“A magpie died on the driveway. AR threw it off into the grass, it was back on the driveway in the morning. Aziza keeps asking why it’s there. Its mum’s birthday soon.”

“I was angry about cleaning the house and the vacuum cleaner broke so I go the one from the studio. A swallow flew in and would not go out. I got really angry and yelled and screamed and tried to chase it out with a broom while the girls watched.”

“A very glossy crow flew into the windows pecking and attacking its reflection at mum and dads house while I was helping dad with the accounts and cancelling mum’s phone. Apparently, it has put holes in all the flyscreens. I asked dad if mum was angry with him.”

“The swallows have moved onto the backdoor frame. We will have to move the swallows on though because they are pooing right in the doorway which isn’t ideal.”

“Planting fruit trees for our wedding anniversary when a mopoke owl flew into a nearby tree and watched us all day.”

“A few weeks ago I was cooking in the kitchen with music on – mums CD’s – I could feel her presence so I asked her to show me a sign. I asked to see a wedge tailed eagle. I miss her.
Later that day AR and Althea went to visit her grave to collect leaves as references for the headstone he is carving and on the way home they saw a wedge-tailed eagle from where they stood at the gate. AR saw it again the next day being chased by crows. Dad is really grumpy.”

“I dreamt last night I ate rocks and then threw up a pardalote. I’m pregnant again.” 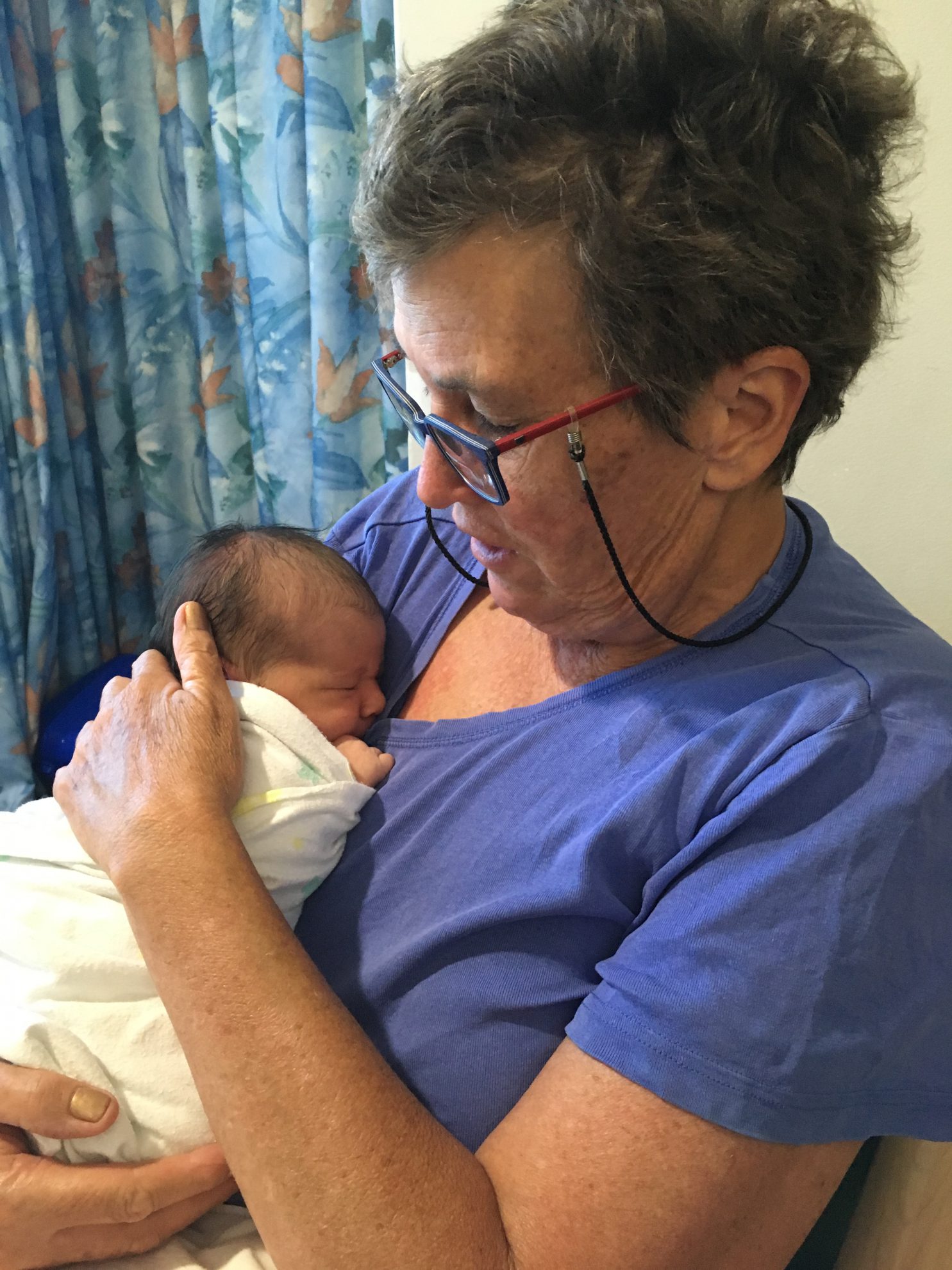 Mum meeting Aziza when she was born 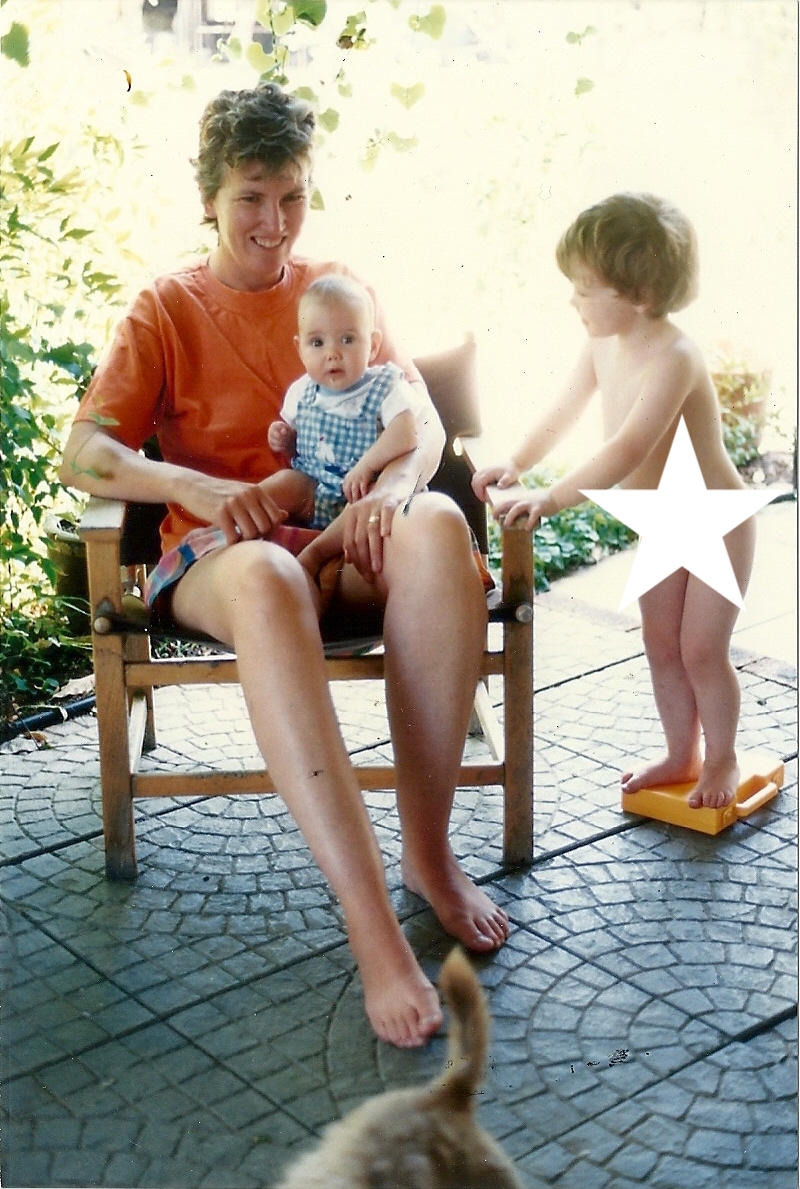 Mum with my sister Julia and me (I'm the baby)

Anna Louise Richardson is an artist and freelance curator investigating rural Australian identity and associated mythologies. Richardson works primarily in charcoal and graphite on cement fibreboard, using a realistic approach, flattened perspective, cut-out shapes and manipulated scale to amplify the subject matter. Her artistic practice reveals ideas of intergenerational exchange, parenthood and signifiers of identity based on her experiences of life in rural Australia living and working on a multi-generation beef cattle farm. The complexities of human relationships with the natural world and the intergenerational qualities of these relationships are driving themes throughout her practice. Richardson’s work depicts animals as a recurring motif to examine shared values on the role of animals in culture, commerce and ecology and how these are shaped through different narratives.

Augury – The diary of birds3 read2