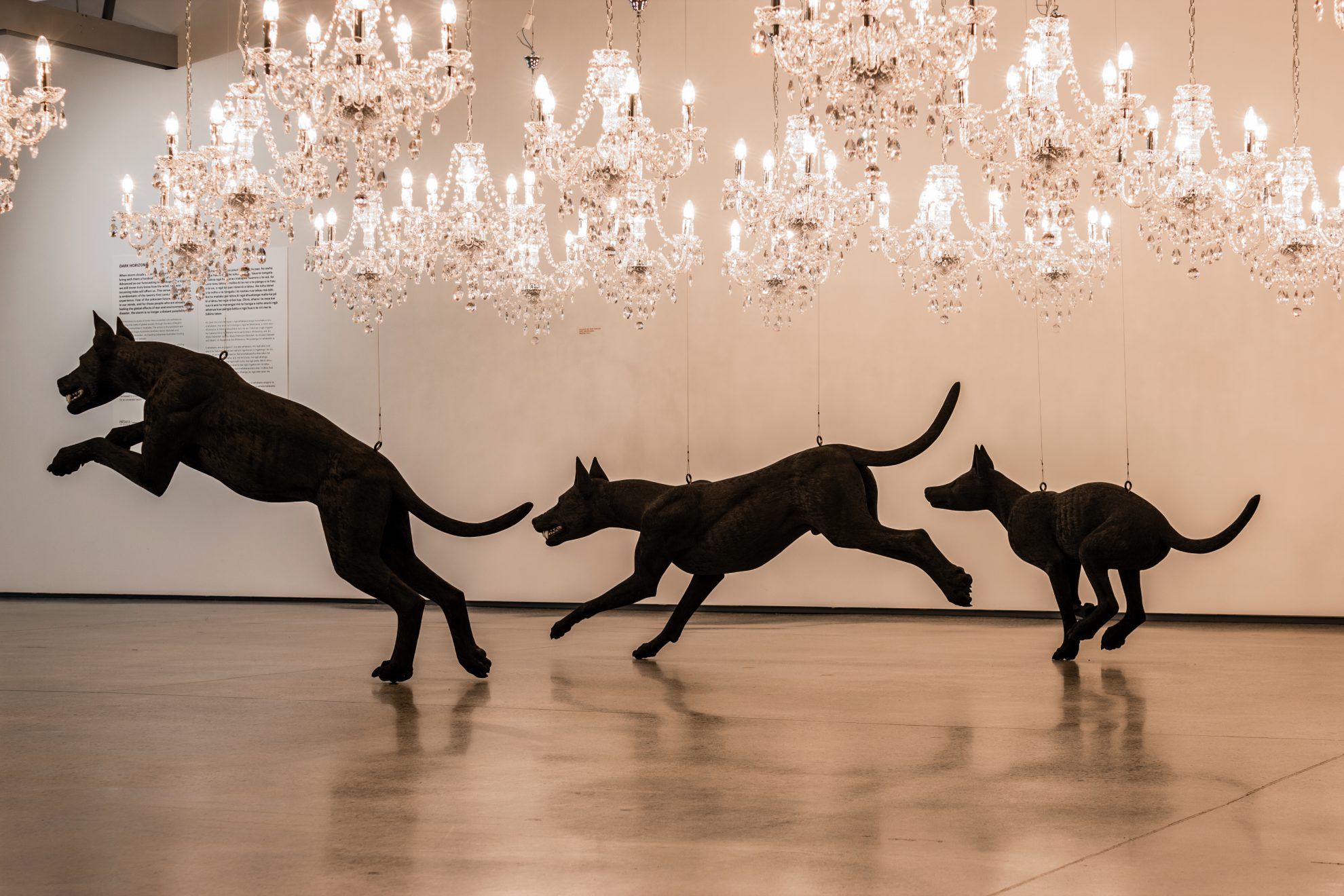 The largest assembly of sculptural work by Abdul-Rahman Abdullah was exhibited at the John Curtin Gallery as part of the Perth Festival’s 2021 program. Everything Is True presented a unique experience, allowing the audience to walk through the memories, dreamscapes and spiritual imaginations of one of Australia’s most compelling contemporary artists. Describing it as a “walk through” sounds relatively detached. There is no way of hiding excitement and wonder while moving through the collection of Abdullah’s work. Admittedly, I rushed through the exhibition, eager to tell my family about the show. This was the first time I had seen stories and symbols that my community could relate to shown on this scale in Perth. The arts industry controls what perspectives are deemed “artful,” and aside from tapestry or antique kitchen utensils, Muslim stories have long been excluded from the Australian repertoire.

Abdul-Rahman Abdullah is an artist creating poetic interventions and unexpected encounters within familiar environment’s. Abdullah’s 2017 sculptural installation titled The Dogs exemplifies his ability to subtly demonstrate complex experiences of identity, memory, and mythology. In both a hypnotising and terrifying affair, three snarling black dogs bound towards the audience under an illuminated cover of crystal chandeliers. Through carved wood, stain, and chandeliers, Abdullah utilises the contrasting symbolism of dogs and the aspirational element of light to demonstrate the complicated relationship between the Australian government and its Muslim community.

Deeply rooted in childhood memories of being chased by dogs, Abdullah also admits to a layer of political critique embedded in The Dogs. Territorial dogs snarl their teeth at those unwelcome to protect the ideals of the ruling class. The chandeliers speak to the Australian government’s superficial representation of itself, aspiring to be included in the “west” despite the Asian region it geographically sits within. The three black dogs representing the reality of Australia’s aspirations; maintaining hard borders, acting on hostile attitudes towards entire communities of people, and guarding of the commonwealth’s stolen wealth.

Dogs are embedded in Australian culture, not only acting as guards for borders and personal property but also as social agents protecting our hearts. Pet dogs are pedestaled as “man’s best friend,” treated as a member of the family, and even in the instance of my friend’s mum, given a seat at the table for dinner. From this national obsession emerges a cultural expectation based on an undisputed love for dogs.1 This whimsical form of Australian identity alienates people, who like me, have absorbed cautious social attitudes towards dogs.

The presence of animals is fundamental to Abdullah’s visual language. “I love exploring the ways that we anthropomorphise animals to reflect our own aspirations and mythologies” Abdullah says. As well as symbolising hostile Australian nationalism, the dogs in Abdullah’s installation also highlight the complex relationship between Islam and dogs.

Invoked in The Dogs is the Islamic superstitious belief that Prophet Muhammad declared black dogs are demons in dog’s bodies. Abdullah humorously cites this superstition, aware that dogs make for a contentious issue in Islam. Islamic texts provide unclear messages regarding dogs. The Qur’an mentions dogs five times, and in no mention are they laden in a negative light. Surat Al-Kahf (Qur’an:18, 9-26) tells the tale of monotheists and their dog who are preserved in a deep sleep by God in a cave, protecting them from the idol worshipping society. The depiction of the dog placed at the threshold of the cave to ward off passersby appears to approve of a close and trusting human-canine relationship. The conflicting ideas towards dogs begin to show in the hadiths. Hadiths are reports by the Prophet’s companions about the speech and conduct of the Prophet. As the Qur’an provides few explicit instructions about how to live as a Muslim, hadiths are considered to be a crucial part of the Islamic textual tradition. Although hadiths are intended to support the Qur’an, a large number of hadiths of questionable origin complicate religious interpretation and, sometimes, give rise to superstition. There are many hadiths that call for compassionate treatment of dogs, my favourite hadiths recount of a sinned human being redeemed after showing an act of kindness to a helpless dog. In contrast to the positive Islamic attitudes towards dogs, there are many hadiths positioning dog’s as impure and low-level creatures with the ability to invalidate a person’s faith. Although in contention with the Qur’anic story of the sleeping monotheists and their dog, some hadith state that those who maintain dogs within their homes will suffer reduced earnings and that angels will not enter their homes.

Animals have the capacity to move between opposing spaces; domestication and wildness, serenity and violence, intuition and logic. Through the liminal position of animals, Abdullah is able to explore ideas of the magical and the mundane. Sitting between categories, dogs are religiously, mythologically, and allegorically powerful because they are full of contradictions.2 Although the study of anthropology suggests “what is culturally unclear” is also “perceived as unclean,”3 scholars suggest that the early Islamic taboo against dogs is rooted in the political-historical power struggle. The dominant religion during the early Islamic period, Zoroastrianism, holds positive views regarding dogs. Dogs were even included in Zoroastrian burial and funerary practices, for example, with the practice of sagdid (literally ‘dog-looking’) a person is not considered officially dead until the body had been seen by a dog.4 Within Zoroastrian cosmology, the bridge between this world and the next is guarded by one or more dogs. This belief is harmonious with the Ancient Egyptian deity of mummification and the afterlife, the god Anubis who is depicted as an anthropomorphised jackal dog. Even though the Qur’anic depiction of the dog at the threshold of the cave is consistent with the worldview of the dog’s liminal state, the Islamic need to distinguish itself from the dominant culture saw the dog become a site of cultural struggle and finally a casualty of Islamic imperialism. In the contemporary setting, due to political and social differentiation, national identity, and theological interpretation, dogs have become a symbol of the gap between Western and Islamic culture. Islamists view pet dogs to represent a shift from piety towards modernity, arguing that the current popularity of dog ownership posess a “cultural problem, a blind imitation of the vulgar culture of the West.”5

The idea that dogs are held in contempt in Islam amounts almost to a truism in the West, helping support an anti-muslim / anti-immigration sentiment. In 2013 a submission was made to the Australian Joint Standing Committee on Migration’s Inquiry into Multiculturalism raising issue to “funding and time spent educating Muslim taxi drivers to accept blind patrons and guide dogs” as one of the ways Australian society was being changed “based on Islamic demands.” As well as calling to cease funding to outreach groups, the submission stated, “we must limit Islamic immigration and apply restrictions wherever possible.”6

Abdullah’s critique of Australian nationalism is illuminated under rows of glittering chandeliers, “promis(ing) an ideal that can’t be accessed from the outside, a gaudy beauty that belies the underlying violence of exclusion.” Australia’s self-branding as the land of opportunity is a promise only extended to those considered, by Australian standards, as “desirable.” The self-declared land of the free only accessible to those considered, by Australian standards, as “legitimate.” As we have been uprooted from our ancestral lands and dislocated from our community structures, our lifestyles have been reshaped by the demands of the countries we have been relocated to. Elegant, tacky, or gaudy, the chandelier has become a common stylistic addition connecting my secluded Perth community with other migrant diaspora’s. There is a quality of awe and humour in the way chandeliers sparkle and reflect throughout the homes of aunties and cousins, now the chandelier stands as a symbol for new aspirations. Away from the mosque and within our homes, the Islamic relationship to light has shifted from religious unity and spiritual enlightenment, to an aspiration for comfort and class.

The Dogs expresses the reality of Australian nationalism, highlighting the structural and societal conditions forcing assimilation on marginalised communities. Vested with symbolism and charged with ideological content, the components of Dogs and Light allow for a nuanced and layered interpretation of Abdullah’s installation. Alongside this critique of Australia’s nationalism, Abdullah subtly comments on the culture of Muslim communities. Admittedly, I maybe got carried away and have found myself in a rabbit hole of interpretations, excited by a stunning contemporary installation that directly and delicately speaks to the politics and histories, myths, and culture of the Muslim experience.

3 Kim Fortuny, “Islam, Westernization, and Posthumanist Place: The Case of the Istanbul Street Dog,” Interdisciplinary Studies in Literature and Environment 21, no.2 (2014): 272

4 Archer, “The Hellhound of the Qur’an: A Dog at the Gate of the Underworld,” 5

5 Fortuny, “Islam, Westernization, and Posthumanist Place: The Case of the Istanbul Street Dog,” 275

Bahar Sayed is a writer whose practice is concerned with theories of place, religious scholarship, spiritualism, and links between tradition and modernity. She enjoys exploring the links between disparate ideas, sometimes threading nuanced comparisons while at other times desperately trying to find a connection. Sayed is currently settled on Whadjuk Noongar Boodjar.

a border can have no boundaries6