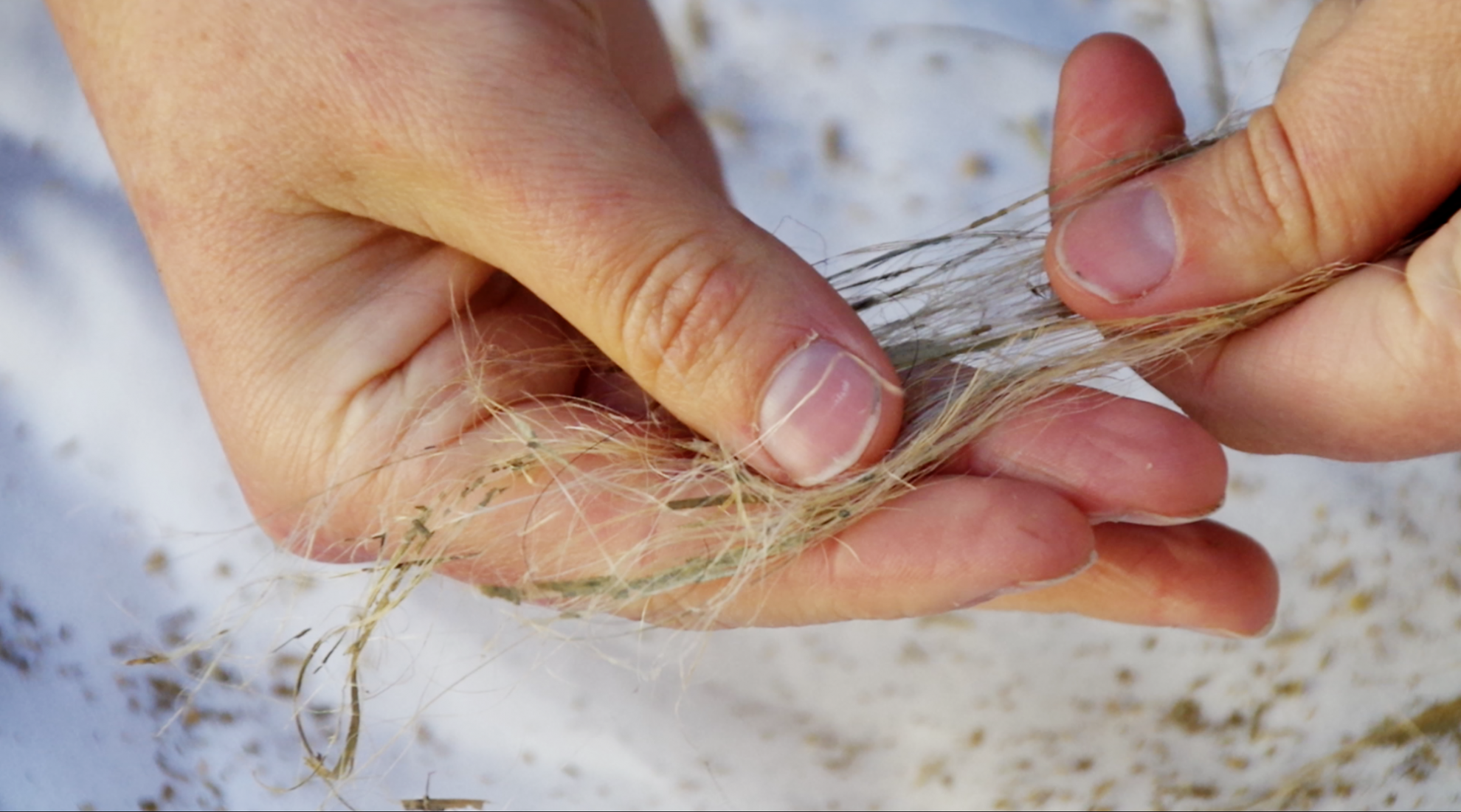 In the thick of the Covid-19 induced lockdowns in Naarm (Melbourne), Anna began to pay closer attention to her own backyard in the search for a plant that could collaborate with her in the fibrous arts of string making. This adventure was a continuation of her ongoing engagement with plants as teachers of colours, food and fibre.

A strange looking boundary-crossing plant came to her attention: moth vine, or Araujia sericifera in its Latin denomination. This plant, like her, is an uninvited guest to the lands of Wurundjeri Woi Wurrung country. As guests they both navigate and process their (un)belonging to these lands. In Coburg, where Anna lives, the plant is considered food for a few and a pest for most, an unwanted intruder that creeps through fences and alleyways.

Rather than reinforce the binary narrative of plants as native versus introduced—which feeds a militant response to the introduced plant or weed as less-worthy, inadequate or pest—Anna honours the plant’s origins and potential. At the same time, she understands its unequal relation within the ecosystems of the Merri Merri, where native grasses struggle to succeed due to centuries of colonial land management, increasing development and cultural genocide.1 In this complex context, both plant and human render each other capable of becoming something else within the turbulent times of global pandemic and environmental crisis: for the moth vine to be (again) a source of fibre and sustenance, and for Anna to become a custodian of the Country where she lives, breathes and creates.

In the process of spinning strings Anna is animating an ancient memory in her body. Contesting phallocentric narratives of human evolution, anthropologist Olga Soffer and archaeologist James Adovasio have delved into the old art of spinning string as a vital moment in the history of humanity: before clay and metal, it was string that helped us to hold things together. 2 This technology has also been acknowledged by anthropologist Elizabeth Fisher, who elaborated on string to propose her “Carrier Bag Theory of Human Evolution”—suggesting that the very first tool was not a weapon, but instead a carrier bag for bringing things home, carrying babies around and bringing fish ashore. 3

When the world as we know it falls apart, fibres, rolled into string, offer a technical means of holding~things~together. This is substantial. An invitation to attunement with the local ecosystems we are part of, a refusal to ignore the gift of plants (introduced and native), a revitalisation of an old skill for our younger generations and a useful string to tie, weave and hang.

As part of the yarns that Anna had during the development of this project, a thought shared by artist Katie West stayed with me. West says: “Recently I’ve been thinking about how human bodies are so geared to making string. And also the idea that the earth is a planet that makes string. A big idea, but—it just makes you feel nice.” 4

In response, I wrote this:

A force of spinning,

Katie West’s words brought me back to the work of Chilean artist Cecilia Vicuña and the understanding of the force of spinning happening simultaneously in multiple and interconnected planes and scales. According to Vicuña, 5 the movement of spinning required to create a thread enacts, in human scale, the spinning movement that is crucial for living in the universe. 6 In her analysis of Vicuña’s visual poetry, Vera Coleman explains how textile thinking connects to a planetary scale where our planet Earth is constantly spinning, and at a subatomic scale where even electrons spin. And as she points out, even the two plied strands of DNA have a similar composition to thread. 7 For Vicuña, the spinning energies are those of creation (poiesis), a movement that sustains biodiversity on earth. 8 Through her work, Anna is cultivating a poietic force along this string of life, letting the fibres she carefully picks let themselves go with the spinning forces that are already there for the creation or worlding of worlds. 9 10

Years ago, living in the same lands that Anna lives in today, I learned from Wurundjeri Elder Uncle Bill Nicholson that everyone who calls Wurundjeri country home has the responsibility to care for Country. Teaming up with weeds, Anna is sharing with us a possible way to practice this care in the everyday, making strong strings from uninvited plants. I imagine her moth vine string and rope as locally sourced material for the emergency kits for climate emergencies produced by artist and researcher Jen Rae and Emma Byrnes. 11 I feel excited by thinking of young people and the local community in beloved Coburg learning with Anna to spin strings, listening to and learning with plants and practicing care at a hyperlocal scale. When the borders of our continent become even less permeable and the tentacles of advanced capitalism continue to dominate, I wonder if creative propositions such as this provide us with antidotes for the cultivation of slow and tactile ways to keep sustaining life for ourselves, our future generations and more-than-human life in our planet.

4. Anna Dunnill, “These Works Have No Edges: Artist Katie West on paying attention to plants”, 2020. https://blindside.org.au/publication/working-with-weeds-interview-2. SARITA GÁLVEZ is a Chilean/Australian educator and textile thinker living in the unceded lands of Ilwempe Ilwempe on Western Arrernte country. She holds a PhD in Education at Monash University. As a mestizx woman, i.e. with mixed Indigenous and Spanish heritage, she investigates the representation of First Nations knowledges and practices in her work and how she can learn with young people from the Traditional Custodians to care for the lands and waters she and her family inhabit as uninvited guests.

I acknowledge I wrote this piece on the generous lands and waters of Western Arrernte Country, I pay my deepest respects to the Elders past, present and emergent. I also pay my respects to the lands and waterways of Wurundjeri Woi Wurrung Country and their Elders past, present and emerging. This land always was, and always will be Aboriginal land.